On Saturday, Nov 12th, volunteer Jim Richards and I attended the Kingman Veterans Day Parade to support our veterans.

Here are a few photos. 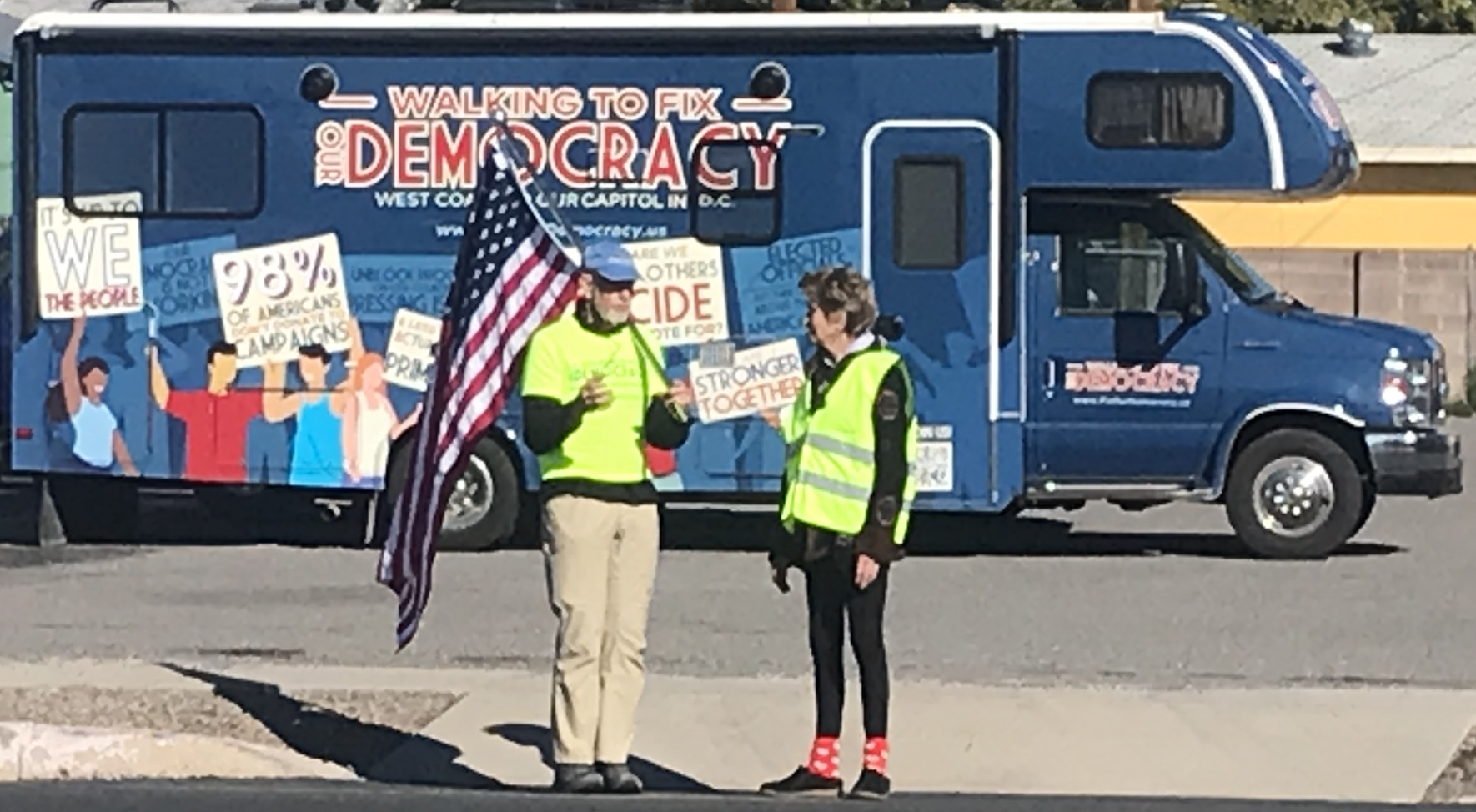 As you may know Nevada voters just approved the first of two separate votes to change the Nevada Constitution to a system of open primaries, where voters can select candidates from any party, and ranked-choice general elections, where voters rank their choices among the top five candidates who advance from the primary. The non-profit Veterans for Political Innovation issued the following thoughts about what patriotism today must mean for veterans. I've included their remarks below as we celebrate our veterans.

Late last night, the AP declared that Nevada voters voted "Yes" on Question 3 to bring Final Five Voting to the Silver State. These voters did so despite opposition from both political parties who, while talking a good game about the importance of democracy, voting and elections, reflexively reject reforms that give voters more power and choices.

Yesterday we also marked Veterans Day. For most, that day is a chance to say "thank you." But, for us, we believe that to be a patriot, and not just declare your patriotism, requires that we invest in the ever-required task of strengthening the American project. Less than 1% of young people will take up arms in service to this nation, and they will do so voluntarily to serve their fellow citizens who they'll never meet, towards missions not of their own choosing, often in places they would never otherwise know.

The question for us on Veterans Day must be: What do we owe them? For us, it's personal and urgent: to ensure the country we love, which has given us so much, can endure for future generations. We honor prior generations' service and sacrifice by ensuring America endures, as good or stronger than we inherited it.

Our work is not just about election reform; it's about our generational assignment of evolving our Republic to ensure it can survive. If your political party tells you that the only way America survives is for them to win and the other team to lose, they're weaponizing your fear and not being intellectually honest. How do we know? Because the message, the fear, and the breathless appeal for donations will be predictably the same in 2 years as it was 2, 4, 6, and 8 years ago.

The honest answer is that America will survive and thrive when all voters, including the 50% of veterans who identify as independents, are reflected in our politics. That will mean competition, more choices, a healthier political marketplace, and less fear-based lesser-of-two-evils voting. Power brokers stand to lose, and people stand to win. Our work is not about gaming who wins but ensuring that the leaders we elect reflect the broad will of the people they are elected to serve. Our current system so often fails us in the limited, often flawed, two choices presented to us on the ballot. As a result, even the 'winners' of our elections are often, in the voters' minds, 'second-to-last-place.' We can, however, fix this. Smarter minds and patriotic hearts must prevail. We believe they will.

For the traditional political class, they first want to know if they'll get more power before forming an opinion of the correct answer. Political giving and media ratings are fueled by fear and outrage; both stand to suffer if we aren't scared and outraged all the time. A flawed system is easier to manipulate and win, particularly if you're in power, and that's what we're up against.

Fortunately, Nevadans haven't forgotten, nor have our extraordinary volunteers, 160 military-connected individuals and growing in over 35 states, who believe in a better answer to solve America's political crisis.

Our team in Nevada, and Mike Escobar in particular, was extraordinarily valuable to serve as the messengers for this movement in commercials like this one. A huge shout-out to all of our volunteers and partners in Nevada. More work is needed to defend these reforms in 2024, and we're honored to be with you at this moment.

Fear is contagious, but so is optimism. And as history teaches us, movements like these are slow and impossible until they're fast and inevitable. Election reform is an idea whose time has come, and our community of veterans is ready for the next mission.