Despite no walking during an almost 200 mile travel day south Saturday with the support RV, an event in Phoenix on Sunday and a Monday full of tasks, errands and relocating the RV to my new location about 30 miles north of Phoenix, I walked 45 miles during the remainder of this week thru Friday.

I started out by walking to check out my new immediate surroundings late on Monday.

Tuesday, I walked further afield but still close by. i climbed a large hill a half mile east to take a photo of my new surroundings. Then I walked a nearby road further out into the desert and checked out the Federal Prison located there.

When a majority of those we elect to represent our collective interests at the federal and state level do not do their job to balance capitalism's earning power so it benefits a majority of Americans, and instead allow wages for at least 40 percent of all Americans who work a full work week to be driven so low they are only a paycheck away from financial disaster when some unexpected health, car or other expense arises, great financial insecurity, anxiety, anger and social disruption occurs. A substantial part of our federal prison population reflects these side effects.

This does not serve our nation's interests. Instead it divides us and weakens our nation's ability to stand up to our potential competitors and enemies. It's just another example of why we must repair our system of representative democracy so that those we elect to represent our interests will properly serve our common good.

Here's a photo overlooking the 583 lot RV Resort with the Federal Prison barely visible in the upper right distance. 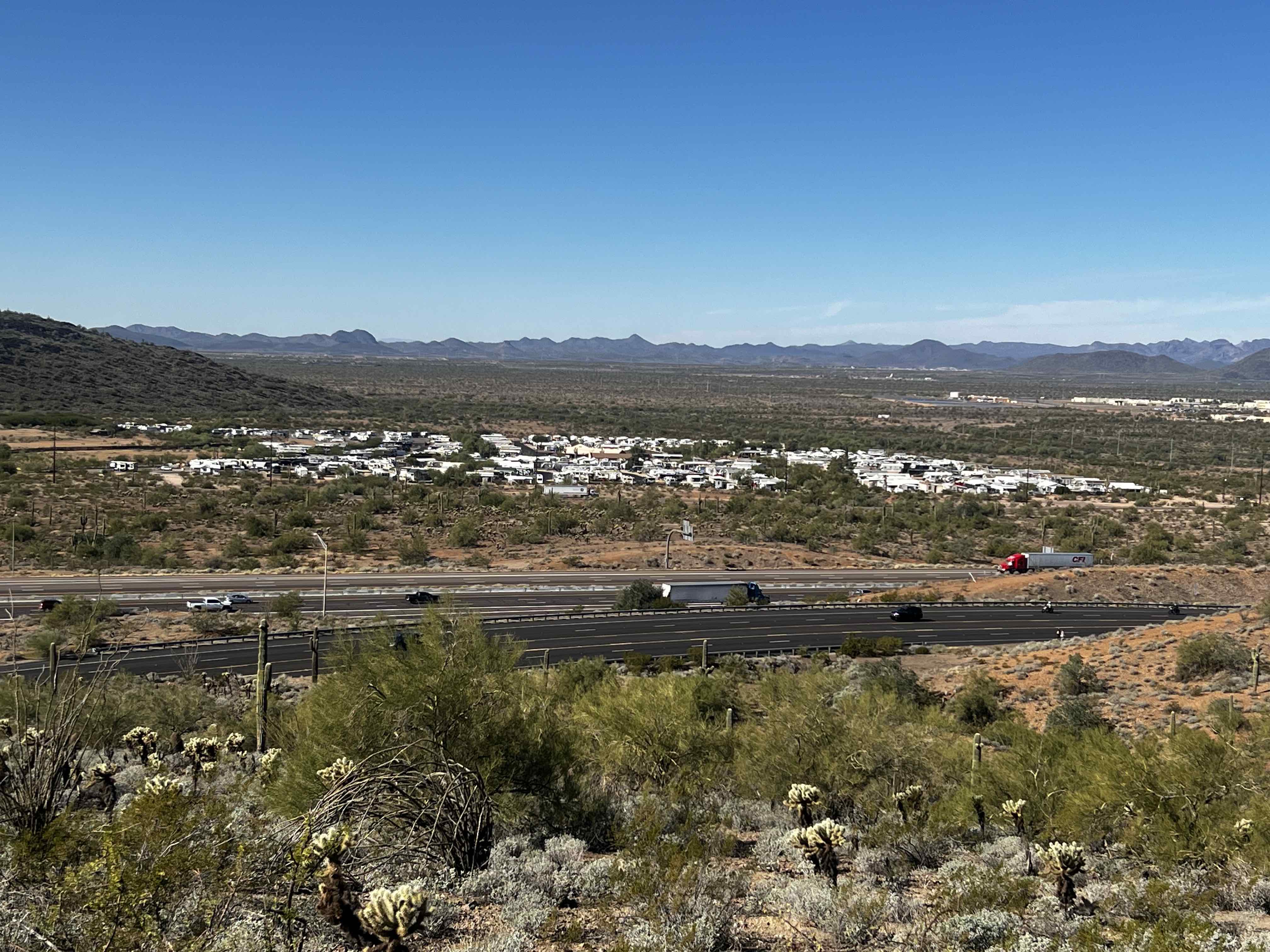 Wednesday and Thursday I drove 20 miles further afield to walk most of the roads and trails along the west side of Lake Pleasant, which is a damed up reservoir with a long history.

In its current iteration, it boasts a 440 foot tall earth dam that tripled the reservoir's size. In 2005 it reached its full 1.1 million acre-feet of water capacity. Today it plays a critical role as a water storage bank for Colorado River water brought down from Lake Havasu, and then further piped into Phoenix via the constantly flowing 30 mile Beardsley Canal.

Unfortunately, despite its constantly flowing canal full of outgoing water, the reservoir today is nowhere near its full capacity. Here are a few photos. 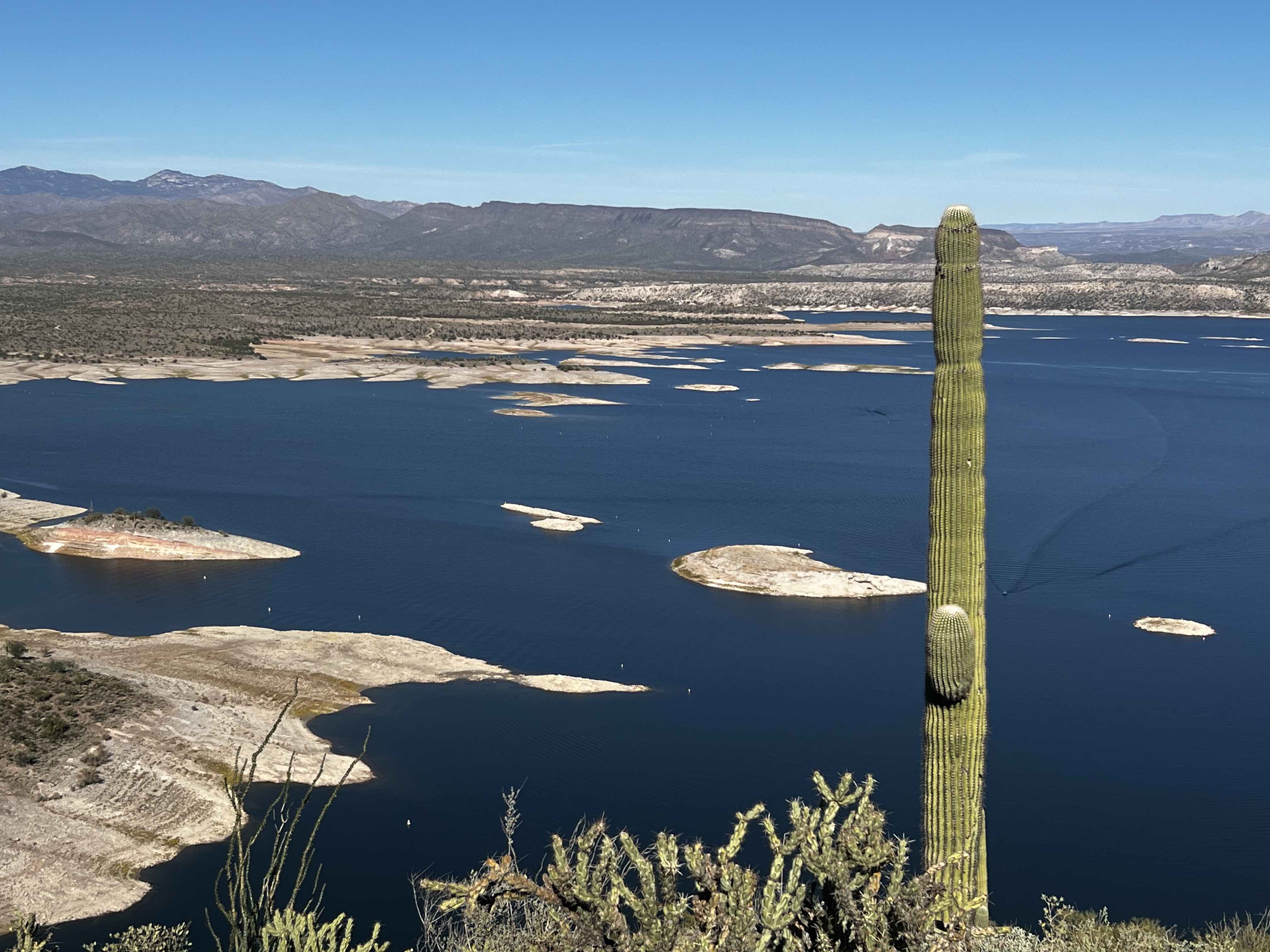 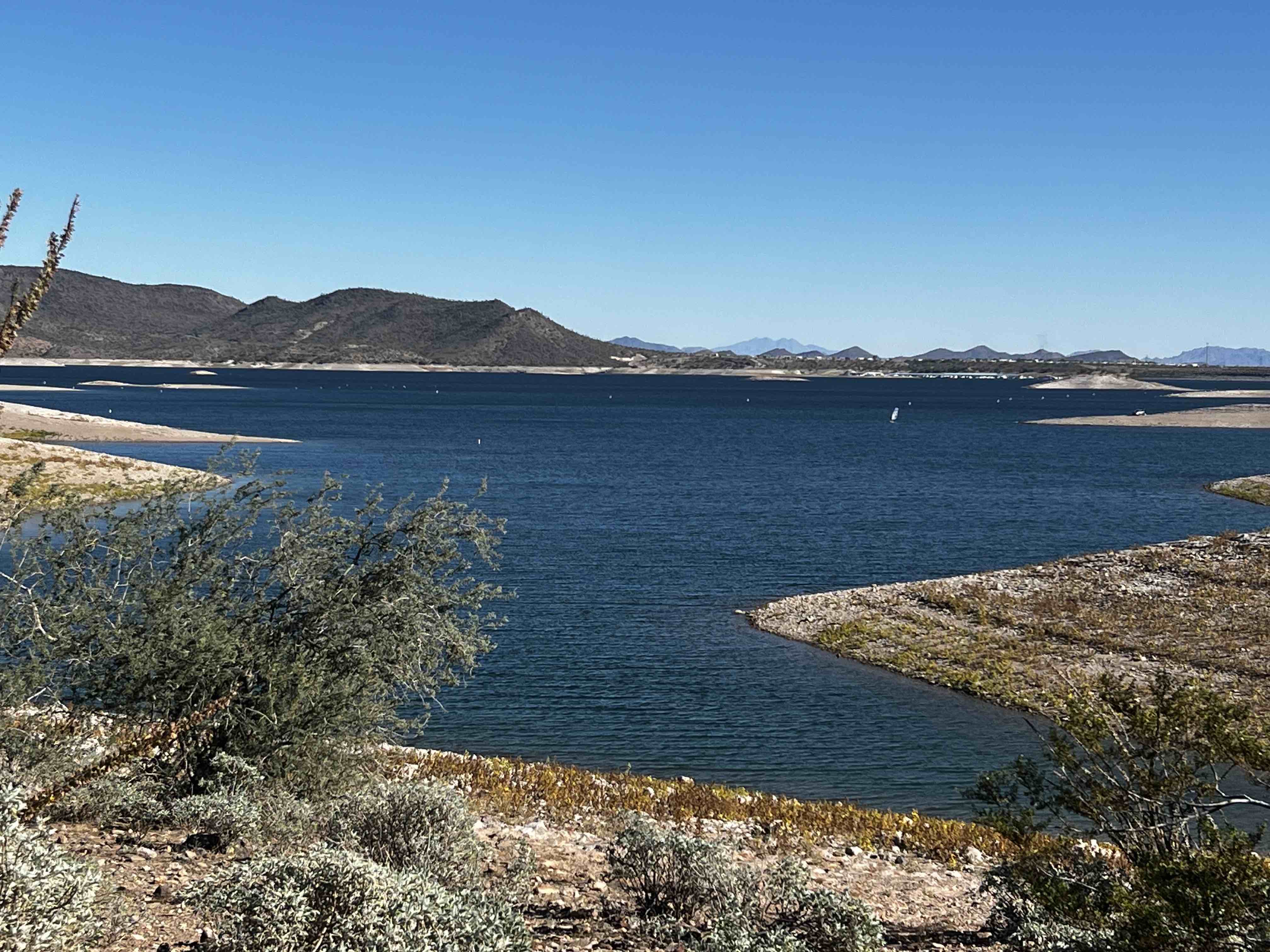 The supply of water in relation to the demand for it are badly out of balance today in many parts of the west.

In 2007, as I bicycled through California's Imperial Valley, I saw firsthand how government policy for distributing water from the Colorado River benefits some California dairy farmers, at the expense of dairy farmers in other parts of America and requires all American taxpayers to pay a little more in taxes.

Most of the imperial Valley is lush with growing crops. But without water from the Colorado River for irrigation, it would all be desert. One of the more water intensive crops grown is hay. With lots ot sun and water, the hay is lush and nutritious. Several crops of it can be grown per year. Much of the hay is harvested into very large rectangular bales. When I passed through, many of these bales were being shipped abroad from west coast ports to places like Japan, where it fetched a premium price.

However, much of the remaining hay is simply hauled across the road to support a feedlot dairy industry. Since the Imperial Valley does not have green pastures, the dairy industry operates feedlots for its cows. It's very efficient. When I visited, much of the milk was sold as milk solids like powdered milk at market prices lower than those possible in other states with dairy industries. This puts smaller dairy farmers out of business if they cannot match the economic efficiency of their Imperial Valley competitors.

Regardless of what the true cost of irrigated water is, whenever that taxpayer supported price is lower than the true actual cost of supplying that water, it causes huge market imbalances that help put dairy farmers in Wisconsin, New York, Vermont and other states out of business.

This makes no sense.

Whenever the price paid for irrigated water is below its true cost, it advantages some at the expense of others. How does this have anything to do with those we elect to go to Washington D.C. doing their job properly to represent the common good of all Americans?

Instead, what actually seems to happen is that dairy farmers in states adversely affected by the ultra-low, taxpayer subsidized price of water lobby their elected representatives to also provide them with federal subsidies to make their production of milk more profitable. When this happens, all the rest of us American taxpayers have our taxes increased a little more to support this result. This still doesn't make sense.

What would make all this fairer for all involved, is to simply have users of irrigation water made possible by federal, taxpayer financed, construction projects, pay the true market cost for the water they are using.

This same principle applies to a wide variety of other activities that are federally subsidized; like the much lower than true market cost rents paid by private citizens and companies to pump oil, raise cattle, mine all kinds of minerals, and more, from federal lands. All this is subsidized by higher taxes paid by all the rest of us American taxpayers.

It all comes back to improper representation of the common good of all 330+ million Americans by a majority of those we have elected to represent our common interests.

This is just one more reason to improve our political system to get better representation from those we have elected to serve on our behalf.