I had a quiet Thanksgiving outside of Phoenix, but grateful to get caught up on some of my writing and emails.  I really missed being with Sally, but like me, she's committed to fixing democracy, even if it means missing a couple of holidays together.  I'm very grateful for Sally's support. ❤️

Despite the personal challenges of the last two weeks, I'm also grateful for the support voters showed for our Democracy. It has taken some hits over the past two years, but has shown resilience, thanks to tireless supporters of Democracy like you.

My Speech on Ranked Choice Voting in Phoenix November 13

My friend Kazz Fernandez has been working here with Voter Choice Arizona, laying the groundwork for a ballot

initiative on Ranked Choice Voting in an upcoming election.  I mentioned in my last letter about Nevada's success with open primaries and RCV, so I'm thrilled that Arizona will attempt to implement RCV.  In my speech in Phoenix on Nov. 13th, I laid out WHY we need these reforms, including how the present primary process divides us, produces ever more extreme candidates for both parties, and does not reflect the majority of citizens.  Alaska just completed its first election cycle with its Top 4/RCV system for Congress, and it ran smoothly, with less party control, and with more candidates competing.  We'll be watching the next two years carefully!  We'll talk more about that in a future letter.

Arizona, and it is exciting to see doing what their own legislators won't!    Voters resoundingly approved Arizona Proposition 211, which adds dark money disclosure requirements for any group spending $50,000 or more on statewide races to disclose any contributor who gave $5,000 or more.  Dark money comes from limited liability corporations and certain types of non-profits which previously have not been required to disclose donors.

Arizona voters voted down Proposition 309, which would have required a government-issued voter ID number in addition to photo ID when voting by mail, was defeated by less than 1% of the vote.   Arizona's elder population and Native citizens sometimes do not have the IDs required, possibly disenfranchising some voters.

The ballot initiative process itself was on the ballot in Arizona.  Legislators made an attempt in Proposition 132 to make any ballot initiative requiring changes in taxes to require a 60% majority, not just a simple majority. But voters made it clear they didn't want politicians stifling their voice and voted it down.

A Lack of a Logistic Volunteer is Hampering My Campaign

I'm trying hard to keep to my schedule and communications, but have fallen behind in the last few weeks because without a driving volunteer, I'm having to handle logistics, too.  Would you be able to help?  There's another way to help, too, right from your home!  Make phone calls to groups where we're headed to help recruit volunteers and help with meeting logistics.  Contact Joanna if you can help with either of those tasks! 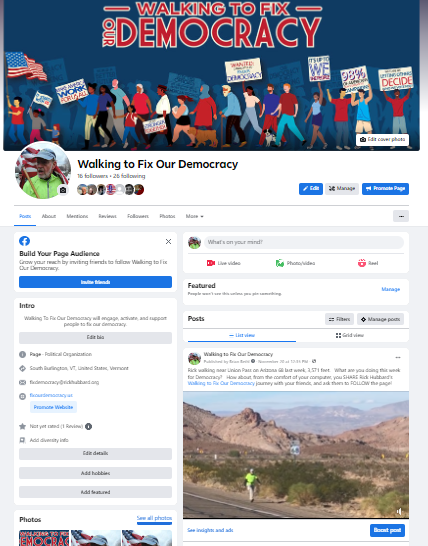 I'm grateful for your support, whether it's time on the phone, on the ground along the way, or with your donations!

MORE Actions you can take to help: